The U.S. Senate has approved a tax overhaul aimed at slashing taxes for businesses and the rich while offering everyday Americans a mixed bag of changes.

The fiscal measure which appeared to be the largest change to U.S. tax laws since the 1980s, promises an addition of about $1.4 trillion over 10 years to the $20 trillion national debt to finance changes that the President Donald Trump’s Republican government say would further boost an already growing economy.

Trump had tweeted early morning Friday that “we are one step closer to delivering massive tax cuts for working families across America.”

According to news monitored on Reuters by our team, the U.S. stock markets had rallied for months in the hope that Washington would provide significant tax cuts for corporations.

Mitch McConnell, the party’s Senate leader enthused: “We have an opportunity now to make America more competitive, to keep jobs from being shipped offshore and to provide substantial relief to the middle class.”

The Senate approved their bill in a 51-49 vote with Democrats complaining that last-minute amendments to win over skeptical Republicans. 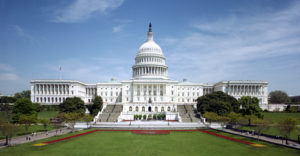 Commenting on the amendments to bill which Democrats in the Legislature claimed were poorly drafted and vulnerable to being gamed later by lawyers and accountants in the tax avoidance industry the party’s Senate leader,  Chuck Schumer said: “The Republicans have managed to take a bad bill and make it worse. Under the cover of darkness and with the aid of haste, a flurry of last-minute changes will stuff even more money into the pockets of the wealthy and the biggest corporations.”

No Democrats voted for the bill which was approved in a 51-49 vote, but they were unable to block it because Republicans hold a 52-48 Senate majority.

Reuters reported that talks will begin, likely next week, between the Senate and the House of Representatives, which has already approved its own tax bill.

It stated further that Trump wants that to happen before the end of the year, allowing him and his Republicans to score their first major legislative achievement of 2017, despite controlling the White House, the Senate and the House since he took office in January.

Republicans failed in their efforts to repeal the Obamacare healthcare law over the summer and Trump’s presidency has been hit by White House in-fighting and by a federal investigation into possible collusion last year between his election campaign team and Russian officials.

The tax overhaul is seen by Trump and Republicans as crucial to their prospects at mid-term elections in November 2018, when they will have to defend their majorities in Congress.

In a legislative battle that moved so fast a final draft of the bill was unavailable to the public until just hours before the vote, Democrats slammed the proposed tax cuts as a give-away to businesses and the rich financed with billions of dollars in taxpayer debt.

“The framework for both the Senate and House bills was developed in secret over a few months by a half-dozen Republican congressional leaders and Trump advisers, with little input from the party’s rank-and-file and none from Democrats.

“Numerous last-minute changes were made to the bill on Friday and in the early morning hours of Saturday. One was to make state and local property tax deductible up to $10,000, mirroring the House bill. The Senate previously had proposed entirely ending state and local tax deductibility,” reported Reuters

Another change in the amended bill is, the alternative minimum tax (AMT), both for individuals and corporations, would not be repealed in full. Instead, the individual AMT would be adjusted and the corporate AMT would be maintained as is, lobbyists said.

Similarly, the bill would put a five-year limit on letting businesses immediately write off the full value of new capital investments. That would phase out over four years starting in year six, rather than be permanent as initially proposed.

Under the bill, the corporate tax rate would be permanently slashed to 20 percent from 35 percent, while future foreign profits of U.S.-based firms would be largely exempted from tax — both changes pursued by corporate lobbyists for years.

On the individual side of the tax code, the top tax rate paid by the highest-income earners would be cut slightly.

The Tax Policy Center, a nonpartisan think tank, analyzed an earlier but broadly similar version of the bill passed by the Senate tax committee on Nov. 16 and found it would reduce taxes for all income groups in 2019 and 2025, with the largest average tax cuts going to the highest-income Americans.

Two Republican senators announced their support for the bill on Friday after winning more tax relief for non-corporate pass-through businesses. These include partnerships and other companies not organized as public corporations, ranging from mom-and-pop concerns to large financial and real estate groups.

The bill now features a 23 percent tax deduction for such business owners, up from the original 17.4 percent.

Democratic Senator Richard Blumenthal said Trump controls more than 500 pass-through companies that will directly benefit. “So the president may be celebrating, but most Americans will rue this day,” Blumenthal said.

The Senate bill would gut a section of Obamacare by repealing a fee paid by some Americans who do not buy health insurance, a step critics said would undermine the Obamacare system and raise insurance premiums for the sick and the old.

Senator Susan Collins, a moderate Republican, said she obtained commitments from Republican leaders that steps would be taken later in separate legislation to minimize the impact of the repeal of the “individual mandate” fee.

Meanwhile, Wall Street forecasters have been hiking their outlooks for 2018 corporate profits on rising expectations that the proposed U.S. tax overhaul, championed by President Donald Trump, will pass, giving a boost to companies’ bottom lines.

Investors are looking for tax cuts to help sustain the rally in U.S. stocks. The separate bills in the House of Representatives and the Senate would cut the corporate tax rate to 20 percent from 35 percent.

Goldman Sachs strategists in a Nov. 21 note said the likelihood of a U.S. tax overhaul was the biggest contributor to its raised forecasts, noting that tax cuts should boost 2018 S&P 500 earnings per share by 5 percent.

Ed Hyman, founder and chairman of investment firm Evercore ISI wrote in a Nov. 19 note to clients that “assuming a 20 percent corporate tax rate,” it is forecasting S&P 500 EPS of $150 for next year.

UBS strategists this week estimated that the S&P 500 could see an earnings boost of 6.5 percent if the corporate tax rate falls to 25 percent. It projects a 9.5 percent gain if the rate goes to 20 percent.

“The buy side has largely factored this in,” said Ian Winer, head of equities at Wedbush Securities, which does not put out its own S&P 500 earnings forecast.

“The reality is people don’t really know what this will be at the end of the day, but clearly people think this is a positive that is going to be good for stocks.”

Other firms have yet to factor tax changes into their 2018 profit forecasts, among them Credit Suisse. Wall Street equities analysts, which base their forecasts on guidance from the individual S&P 500 companies, have yet to include the lower tax rate in their estimates.

But market watchers say firms providing their own estimates are making adjustments now and others are likely to follow.

The House of Representatives has called on the Federal Government to rally States and Local Government Councils’ support for full implementation of the Contributory Pension Scheme ((CPS) in line with the National Pension Commission’s guidelines on the scheme. The call by the lawmakers was sequel to the deliberation on a motion titled ‘Full Implementation of […]

The Federal Inland Revenue Service (FIRS) has reported the sum of N4,178 trillion as its total revenue generated from January to the end of October 2020, representing 99 percent of its N4.23 trillion set target for the period. The Executive Chairman of the Service, Muhammad Nami, who made this disclosure in his goodwill message delivered […]

As the panic over the linking of National Identification Number (NIN) with telecommunication lines assumed a hypertensive dimension since Tuesday, January 19, 2021 among telecommunication services consumers nationwide, the Federal Government has announced February 9, 2021 as the new deadline for the exercise. The National Identity Management Commission (NIMC) in its official Twitter handle confirmed […]