Frontline economists have canvassed genuine economic growth that would be felt by all and sundry aside from figures coming out as indication that the nation’s economy has fully exited recession.

Although the economic experts and analysts have welcomed the 1.92 per cent GDP growth rate recorded by the Nigerian economy in the fourth quarter of 2017 according to the National Bureau of Statistics (NBS) latest report, they, however, expressed concern that the economic growth rate was weak and largely dependent on improvement in oil prices and output, and as such, might not be sustainable in the event of a shock in the local or global oil market.

The experts said policymakers still had a lot to do to keep the economy out of recession and experience higher economic growth rate that could guarantee better living conditions and standards.

They advised policymakers to take steps that would make the country’s economic growth and recovery based on factors that were not dependent on the oil sector.

The Lead Discussant and Chief Executive Officer, Financial Derivatives, Bismark Rewane, having welcomed the 1.92 per cent GDP growth rate recorded by the Nigerian economy in the fourth quarter of 2017, said there was an urgent need on the part of the Federal Government to be proactive and ensure that genuine recovery is attained.

Rewane stressed that the Nigerian situation is slowly getting better in terms of the economic outlook, yet requires commitment, hard-work and also that demand for good governance is key to achieving the desired growth deserved in the country.

According to him, there is need for accountability and transparency in governance in both the public and private sectors of the economy. He maintained that things are not deteriorating, but getting better yet on snail speed.

The rate of GDP improvement is not enough to match the country’s population growth rate and unemployment rate; so there is much more to be done before we can get to where we should be. “Every individuals and government has to know what he can offer that will make life worth living,” Rewane submitted.

He expatiated: “The growth rate is way below optimal, and is insufficient to create more jobs for the 14.2 per cent of Nigerians who want to work but can’t find jobs. It is sustainable, but it means that a lot more work needs to be done and it’s too early to start celebrating.”

He said two-thirds of 36 states were unable to pay salaries of civil servants, and several are heavily indebted. “An essential step to achieving a social democratic welfare state is the need to re-engineer the government through effective governance, accountability, transparency and value-for-money. The Buhari administration has shown no desire to engage with this objective.

He stated that a reduction of personnel cost by 15 percent, and statutory transfers, overheads and other service votes by a third would yield close to N1 trillion in savings.

“It has been estimated that savings of over N700 billion could be realized from the implementation of the Oronsaye report on civil service and parastatals,” said Awoyemi.

Responding to a question on the burden of Small and Medium Enterprises in securing funding from banks, Awoyemi stressed that the fundamental belief is always about structure.

The financial expert explained: “You need to understand how capital is run in this country. You will find in very few situations where banks are in stronger positions than insurance companies, pension funds and others. So, the way capitalists mobilize in the society we live in is very different from other societies out there.

“There is also this notion that people look at banks as if they are some extension of the public service mandate. But it is a private limited company with a profit motive. That profit motive is their core mandate, which they strictly adhere to. So banks are naturally structured to resist risks, especially from the SMEs that don’t have much to bring to the table.

“Again, the constitution of this country makes it clear that everything that comes into government coffers should be shared. Investment is not entrenched in the system, and that is why foreign direct investment keeps shrinking, and nobody does anything to encourage it. In essence, small investments have no place in this society,” he added.

Earlier, the Founding Editor/Founder, Shopher Nigeria Limited, publishers of BUSINESS EYE , Ibim Semenitari, said the media outfit strives to take a peek into the business and economic landscape on yearly basis, while the focus of the Roundtable is to help the public and investors make informed decisions.

She said: “Government is pleased that it is technically out of recession. They bandy good numbers, and say it might be Uhuru sooner than later.  It is on the back of this that our Roundtable today takes a look at how we can ensure sustainable recovery and growth in a fragile economy.

“The absence of debate and conversation is one of the reasons our nation appears sometimes confused and at other times anaemic or poorly developed. Whichever way, today is a chance to add your voice and your ideas to making our country better, and help grow our economy,” she stressed. 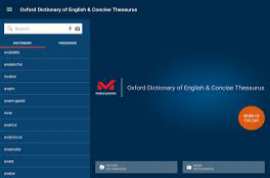 The Oxford English Dictionary is a program designed for Windows PC and a mobile phone that brings the full Oxford dictionary to your computer screen. No matter how loud a copy of one of the most reliable dictionaries in the world, the Oxford Dictionary or English app provides users-complete list of English words from around the world, updated to include the latest vocabulary. With more than 350,000 words and phrases, it is the ideal source for definitions and meanings of EnglishLiterature devices available is mobile Windows PC.

The Central Bank of Nigeria (CBN) supplied US210 million dollars to the inter-bank segment of the foreign exchange in furtherance of its policy measures to sustain the market’s liquidity. Available figures provided by the apex bank on the intervention indicated that authorized dealers in the wholesale segment of the inter-bank forex market received the sum […]

The Central Bank of Nigeria has released the calendar for Treasury Bills issuance for the first quarter of next year with the total value amounting to N1.27 trillion.